The climate crisis is a working class issue — and the working class has the power to stop it! Show solidarity with climate strikes and protests September 20-27! 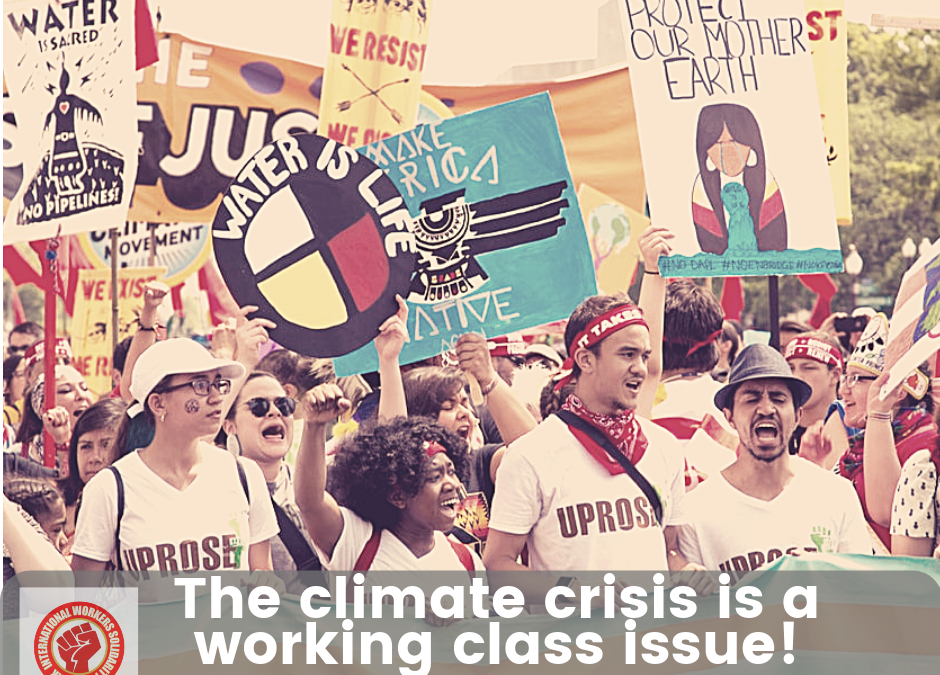 The facts are irrefutable. Rainforests burning, glaciers melting. Hurricanes are occurring with higher frequency, increased ferocity and a wider territorial reach. No one can seriously argue against the existence of a climate crisis.

Internationally and domestically, the impact falls disproportionately on the most oppressed. The Bahamas have been clobbered while in Brazil. President Bolsonaro burns rain forests, decimating Indigenous populations Climate-related disasters force millions to migrate, only to be subjected to inhuman, concentration camp conditions. Environmental racism means communities of color suffer most from pollution and are most vulnerable when disasters hit.

Of the 17 hottest years on record, 16 have occurred since 2001. People with multiple sclerosis, spinal chord injuries and other disabilities are especially vulnerable to extreme heat events due to increased temperature sensitivity that limits or prevents the body’s ability to sweat to cool down.

Only the rich have the means to escape the consequences of the climate catastrophe. We have to ask, who is responsible for it — and who can fix it.

Can capitalism fix the problems it creates?

Some in the climate movement would simply put the blame on “human activity” without putting it squarely on the fossil fuel companies and the wealthy class — or the world’s biggest polluter, the Pentagon. A worker who needs a gasoline-burning vehicle to get to work or gets their electricity from a coal-fired power plant is somehow as responsible for climate change as big oil, big coal, the auto industry, utility firms and the banks they borrow from.

And some would even suggest that appealing to the profit motive — convincing capitalists that weaning themselves off fossil fuels is good for business or subjecting them to “climate pricing”— can solve the crisis. That’s naive thinking. Capitalists caused global warming and they can hardly be trusted to reverse it.

The ruling class calculates short-term economic gain without regard for the huge carbon footprint their profit-taking actions are leaving. Coal and oil barons want to sell the non-renewable, carbon-burning products they extract from the ground. Auto companies want to make vehicles that draw the highest price, not those with the lowest carbon emissions. For military contractors, destruction = profits.

Or how about the utility companies. First Energy lobbied the Ohio state legislature for a bill that bailed out nuclear and coal-fired power plants (including its own) while eliminating incentives for renewable energy sources like solar and wind power. First Energy is a major campaign donor to the legislators who passed House Bill 6.

What the bosses don’t say is that some of them welcome climate change.  This summer million acres of glacier melted in Greenland and arctic Norway, uncovering vast mineral resources and oil reserves.The bosses can’t wait to get their hands on them, hence Trump’s threat to take over Greenland. Blinded by dollar signs, they won’t admit that wealth comes at great environmental cost.

Working class solidarity to save the environment

The climate crisis is in every way, shape and form a working class issue. The wild weather patterns and resulting un-natural disasters leave their heaviest mark on workers, the poor and communities of color. Only the rich have the means to escape the consequences.

Young workers have a lot on their plate — dead-end jobs, unpayable student debt, police abuse, you name it they are dealing with it. But one of the youth’s gravest worries is the climate crisis and what it portends for their very existence — and for all beings on Earth.

The working class does have the power to protect life on the planet. It is labor who produces everything. Nothing moves without us!

Environmental activists, mostly youth, have called for “climate strikes” September 20 and 27. Student strikes may be far more widespread than workplace strikes this time around. But the strike is still know as the weapon of labor, wielded at the point of production to force change.

Strikes have won higher wages, pensions, union recognition and the like. But there are also political strikes, such as May Day 2006, that forced the defeat of an anti-immigrant bill in Congress.

We need to keep the climate strike conversation alive beyond September 20-27— not just in schools but on the job and in unions. We need to fight environmental racism, defend Indigenous land claims and demand self-determination for oppressed nations suffering the heaviest impacts.

Add your name to say: The climate crisis is a working class issue! Click here