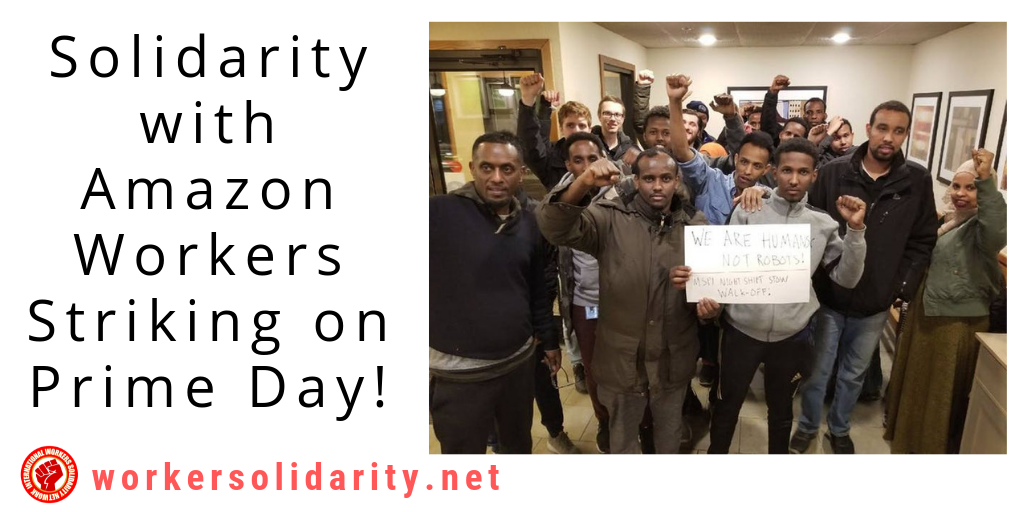 On July 15 — ‘Prime Day’ — Amazon warehouse workers in Shakopee, Minnesota will stage a six-hour strike on a range of issues, including low pay, poor working conditions, increasingly heavy workloads, safety issues, among others. The strike is being built in collaboration with the Awood Center, an East African workers organization.

Many of the workers who are leading the strike are Somali or other East African migrants, who have previously organized work stoppages at the warehouse around these and other issues. This action comes within two months of a major international strike by Uber, Lyft and other rideshare drivers; Wayfair workers walking out to protest the corporation supplying beds for the migrant concentration camps; and other examples of the working class militantly wielding the strike weapon against exploitation, racism and oppression, and the divison of our class.

There are no walls in the workers struggle — solidarity of workers across the globe is our greatest tool to fight back!

Amazon is one of the world’s largest and most profitable corporations, bringing in over $11 billion in profits in 2018 alone. Jeff Bezos, Amazon’s founder and CEO, is the richest person in the world, with a personal fortune of nearly $160 billion. Bezos and the other top 25 billionaires together have as much wealth as 3.8 billion workers collectively across the globe.

Amazon workers in many parts of the world, particularly in Europe, have engaged in organizing drives and strike actions. The pages of the business press in the U.S. have been splashed with headlines about the upcoming strike by Minnesota Amazon workers — showing just how worried the big business owners are that this growing worker militancy is spreading to Amazon in the belly of the beast.

We must do all that we can to build up the very thing that  these capitalist giants fear most — global working class unity!

The International Workers Solidarity Network calls on all progressive people to take action to demonstrate solidarity with Amazon workers in Minnesota who will be striking on July 15!