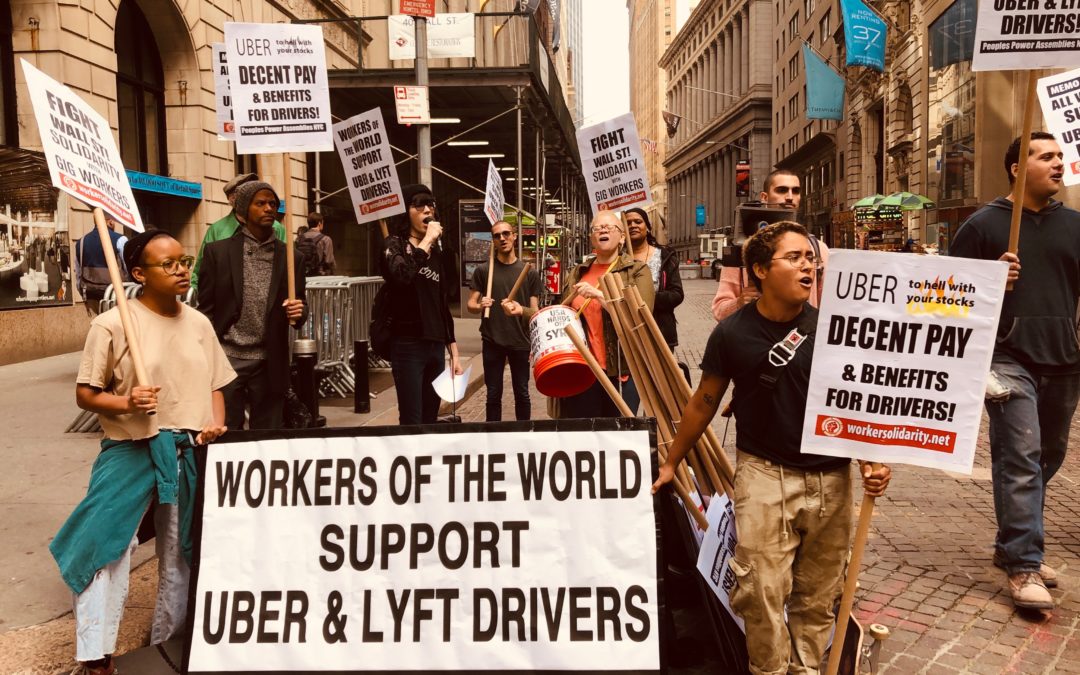 Uber/Lyft/Via/Juno drivers leveraged their collective power and went on  strike May 8 in a global day of action to protest their employers’ greed.

Drivers held a number of solidarity rallies and urged consumers to turn off their rideshare apps and not “cross the picket line.” These actions raised the voices of drivers seeking higher wages, job security and a say on the job.

The historic action was initiated by Rideshare Drivers United-LA (RDU-LA), who networked with Chicago Rideshare Advocates and Gig Workers Rising.

News of the day of action went viral. The “apps off” protest gained recognition from unions, policymakers and grassroots activists. The AFL-CIO tweeted that members should turn off their Uber apps on May 8.

“It took on a life of its own, completely outside the control of the organizers in Chicago, LA and others who started this,” CRA co-founder and organizer Eli Martin told Workers World.

Drivers in Australia, Brazil, Chile, Costa Rica, England, Kenya, Nigeria and other countries joined this historic strike. According to Martin, “We have been getting messages from drivers around the world and all around our nation, joining in solidarity,” including France, Japan, Uruguay and beyond.

Drivers do not fare as well.

Rideshare drivers are not classified as employees but as “independent contractors,” denying them many worker protections. They use their own cars and pay for gas, insurance and upkeep, while the companies get a large percentage of the fares. According to a 2018 Economic Policy Institutereport, wages of Uber drivers averaged $9.21 an hour. Many drivers barely make minimum wage, and some even lose money. 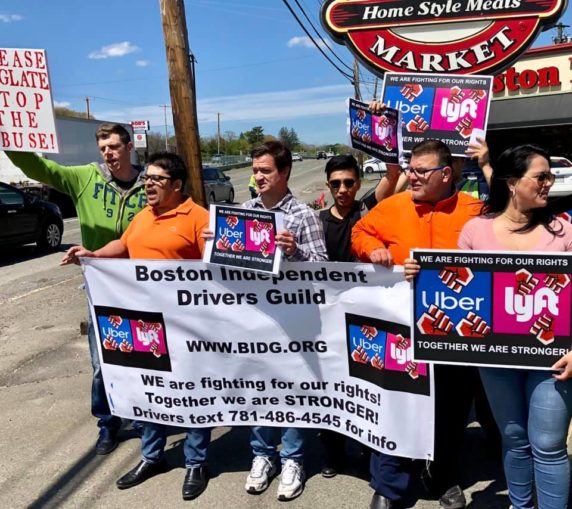 In Boston rideshare drivers were joined on May 8 by supporters from United Steelworkers Local 8751 (the Boston School Bus Drivers Union) and Service Employees Local 888. The Boston Independent Rideshare Guild called the demonstration. As Felipe V. Martinez, a leading organizer of the Guild, told Workers World: “The rideshare drivers of America initiated a national campaign of solidarity. Let this be inspiration for all the workers around the country and around the world, whoever you may be, to stand for equality, for the common worker. The workers have risen and we will never give up. I now know the true meaning of solidarity, and I am proud to be a common worker.”

In New York City, Uber’s largest market, the International Workers’ Solidarity Network and the People’s Power Assembly called a solidarity rally with the drivers outside the New York Stock Exchange. Strike supporters constantly chanted, “Wall Street take a hike, workers of the world support the strike” and “We are all drivers today, workers demand decent pay!”

The latter was an important chant because decent pay is one big reason app drivers went on strike. 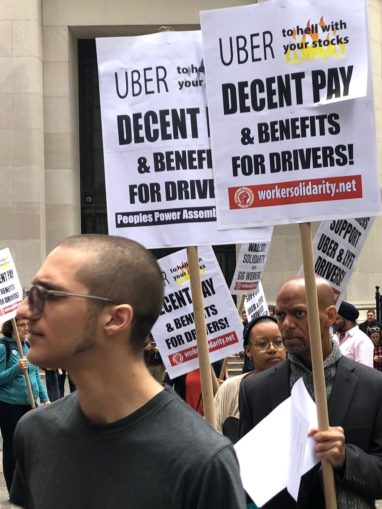 According to a Vox article, most Uber/Lyft/Via/Juno drivers get a third of what passengers pay and make an average of $11.75 an hour.  Half of it goes to cover an EZ-Pass and gas. (tinyurl.com/y4w2ye8c)

Workers are demanding that companies pay drivers 80 to 85 percent of the fare and end “arbitrary and unjust deactivations.”

“Deactivation” is rideshare company lingo for barring a driver from work for an indefinite length of time. As Caroline Said explained in the Oct. 14, 2018, San Francisco Chronicle, “In the easy-come, easy-go gig world, workers can be deactivated with the click of a button or, more often, the soulless calculations of an algorithm.”

After learning of the May 8 coordinated actions, the 21,000-member strongNew York Taxi Workers Alliance voted to demonstrate in solidarity with the striking drivers. Taxi drivers rallied at Uber and Lyft’s NYC headquarters in Long Island City. The Independent Drivers Guild, which according to a May 7 article in AM New York is funded partially by Uber, did not encourage its workers to go on strike but did express solidarity with them.

NYWTA Executive Director Bhairavi Desai said in a public statement: “Uber and Lyft wrote in their S1 filings that they think they pay drivers too much already. With the IPO, Uber’s corporate owners are set to make billions, all while drivers are left in poverty and go bankrupt.” (Uber floated shares in the company, called an IPO [Initial Public Offering] on the stock market on May 10.) 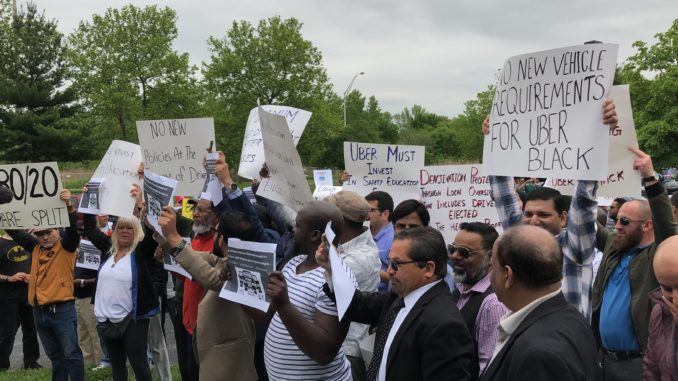 Upwards of 75 Uber drivers, joined by other rideshare workers and community supporters, held a demonstration outside Uber’s Greenlight Hub in Philadelphia. The Philadelphia Drivers Union and the Philadelphia Limousine Association organized the action.

The demonstration was entirely worker-led and reflected the multinational and intergenerational demographic of rideshare workers. Fliers listing the drivers’ demands were printed in Spanish, Urdu, Hindi, Arabic and English. Many drivers brought homemade signs, led chants and gave speeches to the crowd in various languages.

The main demands were an 80/20 split on fares; a minimum wage of at least $20 an hour after expenses; deactivation protection for drivers and the creation of an oversight board of workers with enforcement power; and no changes to Terms of Service agreements without bargaining directly with drivers and their union representatives.

Many workers remarked that Uber and Lyft have been systematically lowering drivers’ take-home pay without giving workers a say in the policies that impact them, forcing many to work longer hours. Some have had to live in their cars. Workers responded enthusiastically to signs from the International Workers’ Solidarity Network, particularly one that read, “Uber profits = Stolen pay from drivers.”

After a spirited rally in the parking lot, drivers marched directly to the front doors of the Uber office, demanding to speak with a manager to deliver their demands. Eventually, after stalling, an Uber manager did agree to hear from them. 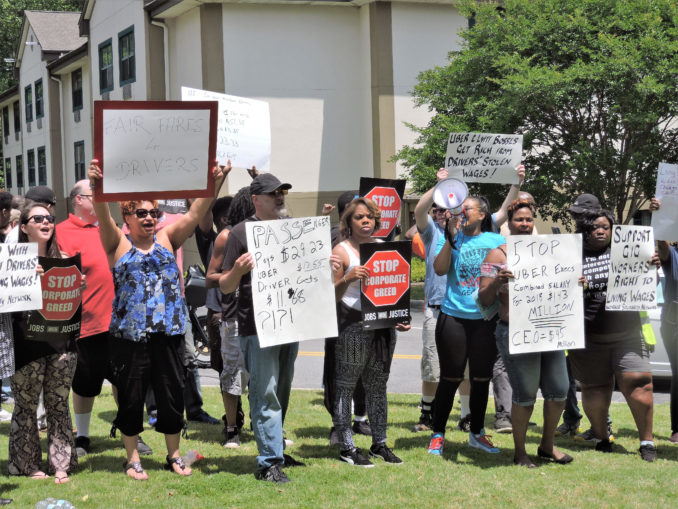 Drivers and supporters held a rally and press conference outside Uber’s hub in Chamblee, a suburb of Atlanta, where they addressed their working conditions and demands. The rally drew extensive local news coverage. Later, the focus of the strike shifted to Lyft’s offices. Drivers announced a statewide meeting later this month to grow their organization, Rideshare Drivers United – Georgia.

Rideshare Drivers United-LA, formed in 2018, organized a 24-hour strike with drivers shutting down their apps from midnight to midnight. Drivers set up a picket outside of Los Angeles International Airport.

An RDU-LA press release demanded “major reforms to the industry to make it fair, dignified and sustainable.” Lyft driver Karim Bayumi was quoted, “Uber estimates that 15 percent of their revenues come from airport pickups. We provide an essential service, but Uber and Lyft investors are the only ones reaping the benefits.”

Strike events were originally organized to coincide with Uber’s Initial Public Offering on May 8 when the company was to sell shares on the stock market. Uber Technologies Inc. was hoping to raise $9 billion to give the stocks a market valuation worth nearly $90 billion.

Uber’s S1 filing with the Securities and Exchange Commission explains how the company plans to increase its profits by exploiting the drivers even more. Uber is calling for pay cuts, reducing driver incentives and “automated driving systems” to replace human drivers.

As the worldwide strike gained momentum, Uber pushed the date for the IPO — the biggest since Facebook’s in 2012 — to May 10. On that day, Uber’s opening share price of $45 declined almost 8 percent and the loss was, according to University of Florida professor Jay Ritter, “bigger than first day dollar losses of any prior IPO in the U.S.” (gizmodo.com) Losses continued on the second day of trading, with an even bigger slide of over 10 percent, while Morgan Stanley still squeezed millions of dollars in fees from investors it steered toward Uber stock.

The greedy upstart rideshare companies in the new gig economy have driven labor costs down to barely above — and in some cases below — the federal minimum wage of $7.25 an hour, with no benefits.

Since less money for workers means more money for the bosses, one might expect investors to flock to these super-exploitive companies in droves. However, the falling price of Uber stock reflects two problems for the investing class: one, capitalism is in a deep, protracted crisis; two, workers are fighting back.

A New York Uber spokesperson tried claiming that the New York Taxi Workers Alliance was not a real union and therefore not a voice for rideshare drivers. (Vox, May 9)

What Uber fails to realize was that the strike was very successful because it is only the beginning of the gig-economy app drivers organizing and rising up.

As we all know, “The workers united will never be defeated!”