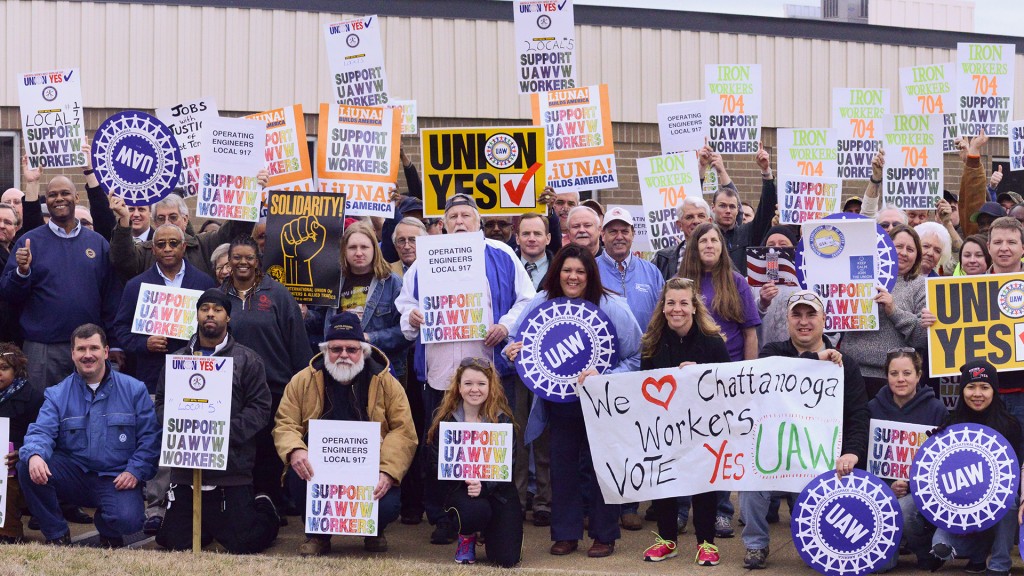 With 370,000 workers at 61 plants worldwide, Volkswagen is the world’s largest auto company. Last year it made almost 14 billion euros in profit. Yet while VW can well afford to pay union benefits and wages, the company appears hell-bent on keeping its only nonunion factory union-free.

Chattanooga VW workers were fighting for a union even before this 2015 photograph was taken.

That one factory is in Chattanooga, Tenn. Open since 2011, it is one of VW’s newest plants. The United Auto Workers narrowly lost a representation election, supervised by the National Labor Relations Board, in 2014.

At that time the election looked like an easy win for the UAW, based on a neutrality agreement signed by both the union and the company. Nevertheless, workers were subjected to a barrage of well-funded, right-wing propaganda via TV, radio, print media and billboards. What finally tipped the scales was a blatantly false statement by U.S. Senator Bob Corker (R-Tenn.) that VW would pull out of Tennessee if the union won.

But pro-UAW workers did not give up the fight for union representation. They formed a members-only, non-majority union, UAW Local 42. They chose “42” because that number was worn by a hometown hero, baseball legend Jackie Robinson.

In 2015 the 160 skilled maintenance workers in the Chattanooga plant voted — by a better than 2-to-1 margin — to be represented by the UAW as a unit.

The NLRB certified the results, but VW refused to recognize the union, claiming an election would have to encompass the whole hourly workforce at the plant to be legitimate. The case was still pending when this year, on April 9, the UAW withdrew from seeking representation for the smaller unit in order to request an election for all Chattanooga VW hourly workers.

Since 2015 the union has grown its base of support among workers outside the maintenance unit. By April 9 a majority of plant workers had signed cards stating their desire to be represented by the UAW.

Company and state unite to block the union

This time VW has taken the gloves off. The company itself, with help from the politicians, is now openly leading the anti-union campaign. This includes mandatory “captive audience” meetings, where the company makes workers sit through a hard sell for keeping the union out.

One such meeting on April 29 featured Gov. Bob Lee, who extolled the virtues of a nonunion workplace — specifically referring to his management of the nonunionized fabricating company, owned by his family, before his election to state office.

Soon after the meeting with Lee, VW supervisors engaged in intimidating conversations with workers and handed out anti-union leaflets.

VW has the backing of the reinvigorated 2014 propaganda machine, including the group leading the anti-union drive, Southern Momentum. In a thinly veiled appeal to racism, that group is again plugging anti-Northernism, warning about the dangers of a “Detroit-based” union. The misnamed “Center for Union Facts” and National Right to Work Legal Defense Foundation have also joined the fray. Local media coverage has been biased against the union.

The company’s arguments are easily refutable. VW hypocritically claimed that no election could take place until the UAW was decertified — through an NLRB election — as the representative of only the maintenance trades at the plant. But VW has spent nearly three years fighting union recognition for those very workers!

The company’s staunchest ally has proven to be the NLRB itself, now that the majority of its members are Trump appointees. The union had asked for an election to be held April 29 or 30, but no election was scheduled. On May 3 the board voted 2-1 to grant VW’s request to hold off on an election.

Only an unabashedly pro-corporate labor board could render such a decision. That is exactly what Trump had in mind when he appointed John Ring, Marvin Kaplan and William Emmanuel to the NLRB. Ring came from a Philadelphia-based, union-busting law firm, Morgan, Lewis, and Bockius. Kaplan’s former firm, McDowell Rice Smith & Buchanan, brags of “a long-standing reputation as one of the select go-to firms for businesses in difficult times” — a code for “union drives.”(mcdowellrice.com)

Emmanuel (not involved in the VW decision) comes from Littler Mendelson, the same law firm that represents both VW and Nissan. The latter was successful in beating back a UAW drive last year at its Canton, Miss., plant through aggressive intimidation. VW has adopted Nissan’s playbook.

VW, while highly profitable, has been paying out billions of euros each year since the 2015 “diesel-gate” emissions cheating scandal. Squeezing more product out of fewer workers is a way to recoup some of those losses. So the bosses don’t want any union interference with its profit taking.

In Tennessee, company scare leaflets have warned workers that they could lose pay and benefits through the collective bargaining process. While that is actually a rarity in a first contract, it’s hypothetically possible — but only if the company demands these cuts and the union feels it has to accept them.

VW is obscuring the fact that, without a union contract, a company can make cuts pay and impose worse conditions any time it wants!

Pay and benefits are not the primary complaint, however. Injuries, including repetitive motion injuries such as carpal tunnel syndrome, are frequent. The speedup — long the bane of autoworkers and a key reason they organized in the 1930s — is pushing workers to their physical limits.

As Local 42 explains on its Facebook page, “Changes were made in standardized work, line speed increased, a two-line system was changed to a single line feeding into two, [and] injuries increased in a two-month period. Two previous years before changes, injuries were very seldom.”

Unhealthy work schedules and last-minute shift changes are also taking a toll. A union contract could require advance notice of shift moves and allow shift preference on the basis of seniority.

Chattanooga workers are now arguing back when supervisors corner them and badmouth the union. Some 30 workers came to the NLRB hearing on the vote request to explain why they wanted a union. The governor’s speech drew a number of boos.

Despite company intimidation, VW workers are fighting for a union.

Martha Grevatt is a 31-year retired Fiat Chrysler worker and serves on the Executive Board of UAW Local 869.