On May Day in North and South Carolina, education workers strike by the thousands 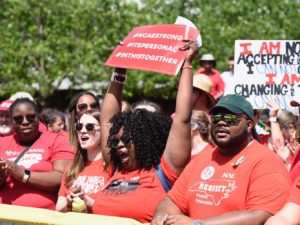 On May 1, over 20,000 education workers, including teachers, bus drivers, counselors, custodians and nurses, along with students and supporters from across North Carolina, converged on the state legislature in Raleigh. They shut down 35 school districts and closed public school for 850,000 students. Workers used a “personal day” to take the day off.

Organized by the North Carolina Association of Educators, the protest raised five demands: provide enough school librarians, psychologists, social workers, counselors, nurses, and other professionals to meet national standards; pay $15-an-hour minimum wage to all school personnel, 5 percent raise for all school employees and a 5 percent cost-of-living adjustment for retirees; expand Medicaid to improve the health of our students and families; reestablish state retiree health benefits for teachers who will be hired after 2021; and restore extra pay for teachers with advanced degrees such as a master’s degree.

Last year, after years of struggle, all state workers won a raise to at least $15 per hour, with the exception of school-classified employees. This year they are fighting for the same pay. “I have been here 26 years; I am worth more than $15 per hour,” stated teachers’ assistant Keena Proctor in Asheville.

A broad range of civil rights, labor and other community organizations supported the education workers. The Rev. Dr. William Barber II, representing the Poor People’s Campaign, spoke at the rally: “When you hurt teachers, when you deny health care, when you refuse to pay workers $15 and a union, it is against the good of the whole. It is time to teach this legislature a lesson!”

The May Day action was a defeat of anti-union forces that had used red baiting to try to scare people away. Senate leader Phil Berger had said, “The far-left NCAE strike will keep kids out of the classroom and force parents to find childcare.” The April 11 Raleigh News and Observer ran the headline, “Advocating for ‘our children’ or a ‘Marxist’ event?”

In Columbia, S.C., the state’s capital, over 10,000 education workers and supporters gathered outside the Department of Education and marched to the State House to call on lawmakers to raise their pay and increase funding for public schools. They also demanded better working conditions and a better learning environment for students, with less testing, a daily lunch break, adequate restroom access and smaller class sizes.