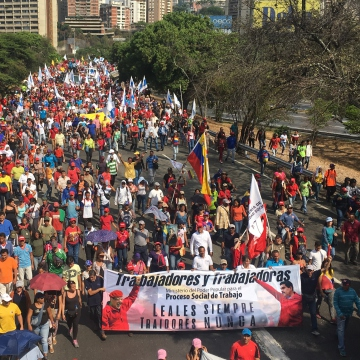 International Workers’ Day honors workers worldwide. On May 1, tens of millions of workers turn off their machinery, walk off the job and march together in a show of strength and solidarity. This special day heightens local and worldwide class consciousness.

May Day demonstrations expose the exploitation of labor by global capitalists and recognize workers’ struggles against that injustice. Labor unions, social justice groups, socialists, communists, anarchists and other workers’ allies participate. All those who fight for workers’ rights are out on the streets.

At a time of brutal capitalist globalization, workers, oppressed and poor people face government austerity policies, with cutbacks in jobs and essential social services. They are super-exploited in the corporate race to the bottom, manifested in low wages and unsafe working conditions, even child labor. At the same time, bosses use racism, sexism, anti-LGBTQ bigotry and xenophobia to try to prevent class unity.

The scourge of sexual and physical abuse continues in many workplaces, although the #Me Too movement has brought it to public view. Workers at McDonald’s eateries and Google facilities on many continents have walked off the job to oppose this and systemic racism and sexism. Wildcat strikes opposing low wages, unsafe working conditions and bosses’ mistreatment have taken place at businesses owned by transnational companies or producing goods for them.

Although May Day is commemorated worldwide — and is even a legal holiday in many countries — it is not an official day in the U.S. where it originated. On May 4, 1886, 500,000 workers struck across the U.S., demanding an 8-hour workday; 40,000 did so in Chicago. European socialists formally set May 1 as International Workers’ Solidarity Day in 1889. The idea spread quickly in Europe as workers struggled against low pay and oppressive working conditions in factories.

This May Day workers of all nationalities, cultures, genders, generations, abilities and disabilities demonstrated, many with their unions, socialist parties, and social justice or community organizations. Red flags flew high.   Signs called for higher wages; workplace safety; respect on the job; rights for temporary, contract and migrant employees; and the right to unionize without retaliation. Some banners denounced the root cause of these ills: capitalism.

Here are some May Day highlights:

A critical anti-imperialist struggle today is that of the people of Venezuela and their government, headed by President Nicolás Maduro, against U.S.-led intervention. The imperialists back self-proclaimed “leader” Juan Guaidó, who represents the wealthy and their allies in Washington.

The Venezuelan masses — industrial and agricultural workers, union members, women, poor and Indigenous people, and revolutionaries — support their president and 20 years of Bolivarian government. On May Day, another massive demonstration — one of many — took place in Caracas in support of President Maduro, following the right wing’s failed coup attempt and honoring the working class, backbone of the revolution.

Chants of “Evo, Yes! Yankees, No!” were shouted on May Day in Cochabamba, Bolivia. President Evo Morales and labor union leaders led the day’s march, following announcement of a 3 percent increase in the minimum wage. The Bolivian Workers Center, under leftist leadership, is now officially a council of state, with power to implement laws. Minister for Social Movements Alfredo Rada said, “This ratifies this is a government of the workers.”

President Morales said, “We pay homage to the union leaders that throughout history have won workers rights and benefits for the people.” He honored the “martyrs of Chicago” — workers killed in the struggle for the 8-hour day in the 1886 “Haymarket massacre.” (Telesur, May 1)

Thousands blocked the streets of Buenos Aires, Argentina, during a 2-day strike organized by labor unions and social movements in opposition to President Mauricio Macri’s austerity policies. The job actions paralyzed government offices, schools, banks and airports in the capital city. Cuts in subsidies for transportation and utilities have resulted in higher costs for the masses, while layoffs are contributing to worsening impoverishment.

On May 1, workers in Mexico won the right to collectively bargain with employers through labor unions, free of retaliation. The $2 daily wage for factory workers has attracted U.S. companies to manufacture there and super-exploit the workers, spurning unionized workers in the U.S. But Mexico’s workers are fighting back.

Some 1,427 international guests from over 100 countries, representing 140 labor organizations, joined the people of Cuba on May Day. The masses commemorated the 60th anniversary of their socialist revolution, hailed the Communist Party of Cuba and showed solidarity with Venezuela and other progressive governments in Latin America.

The huge march in Havana and the many demonstrations throughout the island were ever more important as a show of strength against the saber-rattling Trump administration, which threatens to intensify the inhumane blockade of Cuba because the country supports President Maduro.

Cuban President Miguel Diaz-Canel Bermúdez, on his way to Havana’s Plaza de la Revoluciớn José Marti, tweeted: “The people are united: workers campesinos, students and all Cubans.” He said Cuba “offers a firm and revolutionary response to the statements loaded with threats, provocations, lies and slander of the Yankee empire. Cuba ratifies that we are free, sovereign, independent and socialist.” (Granma, May 1)

In San Juan, Puerto Rico, demonstrators holding shields faced off against police. Protesters demanded the ouster of the U.S.-imposed Federal Financial Control Board, established to monitor the island’s finances for Wall Street and strip its resources to benefit U.S. imperialist interests.

May Day was commemorated on the African continent from Algeria in the north, in the continuation of the mass movement for “a new democratic regime,” to South Africa where workers rallied.

The Congress of South African Trade Unions congratulated the thousands of workers who participated in May Day activities around the country. The organization pledged to ceaselessly work to build a federation that fights for its membership, is a social force for transformation and a home for all workers.

Referring to white business owners who, with foreign capital, still dominate the economy, and to the poverty, unemployment and inequality inherited from apartheid, COSATU asserted the need to deepen the organizational capacity of the workers’ movement and to “drive a pro-working class transformation of society.” (cosatu.org)

Members of labor unions CCOO and UGT marched in Madrid and other major cities and towns in Spain, demanding a rollback of probusiness policies and “reforms” enacted by the conservative government, resulting in a loss of secure jobs and a rise in “precarious” employment.

Activists in the Yellow Vest movement, labor unions, socialist parties and other progressive organizations marched in Paris, France, against President Emmanuel Macron’s tax benefits for the rich at the expense of workers and poor people. Police attacked and tear-gassed demonstrators.

The German Federation of Trade Unions (DGB) reported that 381,500 people participated in 481 labor union actions calling for workers’ rights across Germany. Anti-fascists and other left forces also rallied. Many protesters denounced capitalism and ultra-right nationalism. In Berlin, police attacked anti-capitalist protesters. The DGB called for rejection of the far right in upcoming elections.

On “May 1 Labor and Solidarity Day,” hundreds of thousands of members of labor unions and leftist parties marched for workers’ rights in several cities in Turkey. The large labor unions that organized the demonstrations denounced a government-proposed severance pay “reform.” In Istanbul, protesters were thwarted by police from marching to Taksim Square, where 34 people were killed by police during a 1977 May Day rally. This year, police arrested 137 protesters in Istanbul and harassed demonstrators in other cities.

Waving Palestinian flags, workers rallied in Ramallah on the Occupied West Bank, demanding their rights, jobs, higher wages and improved living conditions. They called on the world community to pressure Israel to end its occupation and ensure Palestinians a life of dignity.

In Gaza, Palestinians demonstrated for an end to Israel’s 12-year, U.S.-backed blockade, which has caused a human catastrophe there, with extreme poverty, 52 percent joblessness and incomes of $2 a day. In the days after May Day, Israel bombed Gaza, killing 23 Palestinians as of May 5.

Thousands rallied in Dhaka, Bangladesh, demanding better wages and working conditions for all workers, and paid maternity leave and protections from workplace sexual and physical abuse for women garment workers. They demanded reinstatement of thousands of garment workers fired for striking over paltry wages. Garment workers’ federations and leftist forces, some carrying red flags, were out in force. Four million super-exploited garment workers annually generate $30 billion in exports made there for global brands.

Workers marched in Pakistan and throughout India with their labor organizations. Socialists, communists and other leftists participated.

In Seoul, South Korea, the Korean Confederation of Trade Unions organized a protest of 27,000 workers and reported 57,000 demonstrators came out in 13 other cities. They marched for the right to unionize, equitable rights and wages for temporary contract workers, permanent jobs — and an end to precarious labor which particularly impacts poor and disabled workers. The KCTU issued a joint statement with a North Korean workers’ organization, calling for both Koreas to collaborate on economic projects.

Thousands of workers and members of left and social movements marched in Mendiola and Manila, the Philippines, for livable wages, better working conditions and an end to short-term contract employment. As red banners flew, some demonstrators burned a gigantic effigy of President Roberto Duterte because of his anti-worker economic policies and brutal repression of political activists and dissenters.