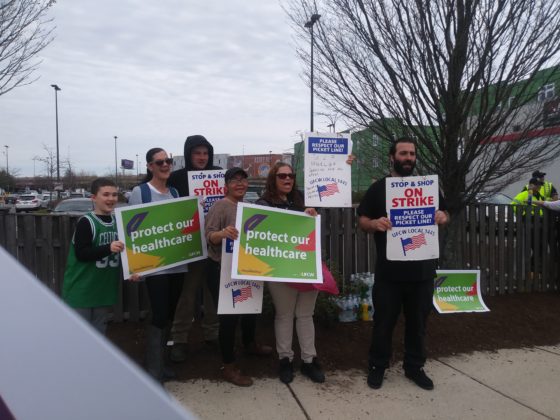 Approximately 100 Stop & Shop workers and supporters rallied at the Somerville, Mass., store April 14 to demand a fair contract for members of Food and Commercial Workers (UFCW) Local 1445 on strike since April 11. On the busy highway out front, hundreds of cars honked, and drivers yelled, waved and raised fists in support of the strike.

UFCW 1445 is one of five union locals representing workers at Stop & Shop locations in Massachusetts, Rhode Island and Connecticut. Combined, the five striking locals represent more than 31,000 workers who are fighting against the company’s attempt to completely dismantle what was previously considered the best food retailer contract in the region.

Although police had forced striking workers away from the store entrance, strikers set up picket lines at parking lot entrances, which merged into one long picket during the rally. The determination of striking workers at this and other locations forced Stop & Shop back to the negotiating table as of Saturday night, April 13.

After all five UFCW locals representing Stop & Shop workers voted with wide margins to authorize a strike last month, workers across the Northeast walked out at 1 p.m. on April 11. This was due to a breakdown in negotiations after Stop & Shop presented its disgraceful “final offer.”

Workers World interviewed several workers at the picket line in Somerville, who highlighted what they considered to be the strike’s main issues. Most noted that they were not even fighting for any increases, but just to keep the contract they already had.

Reina, who works in the produce section, told WW that her husband was deported to El Salvador in 2006. “I depend on this check to pay rent, internet, electricity and other things. I only have one income, and I am raising my three daughters on my own. The company wants to cut pensions, cut our vacation down to two weeks from four, refuse to pay us time-and-a-half on Sunday. My back hurts, but I will be out here as much as I can. We need to fight!”

Workers also mentioned that the company wants to kick spouses off their insurance plans, which would hike health care costs for the workers. On top of that, proposed increases in health care premiums would cut workers’ take home pay and make increased expenses harder to meet.

Stop & Shop is also trying to replace time-and-a-half pay on holidays and Sundays, the busiest day for food retailers, with flat bonuses that won’t increase with the cost of living. Several of the workers interviewed mentioned that their parents, children or other relatives also worked for Stop & Shop, multiplying the devastating effect of the proposed concessions.

Workers also raised the increasing use of self-checkout lines to eliminate cashier jobs and the introduction of surveillance robots in many stores. Another issue was an attempt to introduce a two-tier system by denying new hires any union benefits — an increasingly common union-busting tactic.

Many speakers also noted that the Stop & Shop strike comes in the wake of the successful Marriott hotel workers’ strike and the months-long National Grid lockout last year. The Stop Shop workers are determined to win their contract and mark another victory for the labor movement in the Northeast.