You are the working class 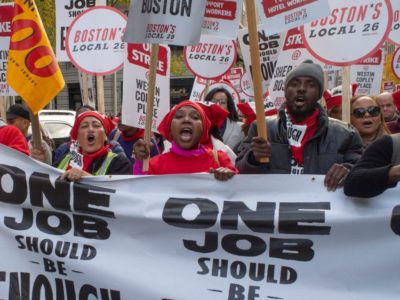 The ruling class has offered up a big lie, and we have swallowed it whole. We have been told that we are not “working class,” that we are not workers at all. Instead, we are part of a nebulous “middle class” — college educated, working toward upward mobility, go-getters. We have a side hustle, but we’re not working class.

To be working class is to be poor, rural, uneducated and struggling, to be a victim of the predations of the Wall Street vampire aristocracy. Rather than a collective class — a whole, close-knit society — we are a collection of individuals pursuing our own rational self-interests. And therein lies the genius of the big lie.

If we are not a class, then we have no collective class interest. Without that, we cannot engage in class struggle against those who — every day — mine the wealth of our communities to swell their overflowing bank accounts.

The big lie is meant to mask the economic reality of our society; there are those who own and those who do not — the capitalists and the workers. It does not matter where you work or even how much you make.

If you do not own the fast food restaurant where you serve customers or the hospital where you treat patients, you are a worker. Whether you drive someone else’s tractor trailer or write someone else’s software, you are part of the working class. Karl Marx defined these — the restaurants, hospitals, shipping equipment, intellectual property, factories, oil rigs, etc. — as the “means of production.” The working class is made up of those who work every day to produce society’s wealth, but do not own the means of production.

Myth of the middle class

And so we can see the lie of the “middle-class” category. High school teachers who live on food stamps consider themselves middle class. They see their college degree as a marker that sets them apart from the person who delivers food. But the reality is they are united in class interests as workers, and if the bonds of solidarity are properly built, they should be united in class struggle.

The concept of a middle class provides a psychological security blanket. In an era of increasing economic instability, workers in every field know how easily they may fall onto hard times after being laid off or suffering an unexpected medical expense.

There’s very little that one can do to protect themselves from the ravages of the modern capitalist economy. But thinking of yourself as middle class — as separate and distinct from those who are living paycheck-to-paycheck — allows you to feel protected. The painful irony of this is that many people who live paycheck-to-paycheck consider themselves middle class. The capitalist class loves this, as they love all divisions between workers.

The truth is that the false split between the middle class on one side, and the working class and poor on the other, is based more on the type of work one does than on how much a person makes. And yet workers with desk jobs or jobs that require an expensive education are becoming more and more exploited.

Earlier this year The Verge reported on the dismal experience at Facebook contracting firms. These firms hire workers for low hourly rates with virtually no benefits. These tech workers — whose job is to filter out explicit content, particularly racist and violent content — suffer from post-traumatic stress disorder, drug use and suicidal ideation after being subjected to hours of the most horrible videos on the internet. They’re used until they’re used up and then tossed away. (tinyurl.com/y3ou2sk6)

At Amazon shipping facilities, an employee’s every movement is tracked and timed by their package-scanning guns. When they need to use the bathroom, their scanner tells them which facility is closest.  If they use one that is farther away, they’ll have to explain their “inefficiency” to a manager. These kinds of daily humiliations break down workers, and turnover is incredibly high. But none of that matters to the capitalists because profits keep going up. What advantage is there in working for the most cutting-edge companies if those companies only come up with ever more sophisticated means of treating you like dirt?

The logic behind this capitalist propaganda — the divisions between the high-tech and low-tech worker, the more and less educated — is to destroy working-class solidarity. No matter what prestige you believe your line of work has or does not have, if you are not part of the ownership class, you have more in common with literally any other worker than you do with the average hedge fund manager.

We must challenge the big lie and build working-class solidarity. We must think of ourselves and refer to ourselves as working class. We must build connections between isolated workers in every industry so that we can harness our collective power. In doing so, we can turn back the tide of capitalist exploitation once and for all.

Workers of the world unite!